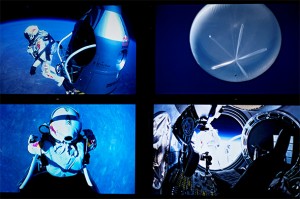 Who Worked on The Suit?

Felix Baumgartner’s suit was made by the David Clark Company, a company manufacturing flight suits for pilots and astronauts since World War II. The Red Bull Stratos team assembled a team consisting of some of the world’s top minds in engineering, aerospace medicine, pressure suit development, capsule creation and balloon fabrication, to plan, design and execute the entire mission.

The Red Bull Stratos, the 120,000 feet skydive from the edge of space, was a mission that transcended human limits. Riedel Communications – one of the leading providers of real-time solutions for video, audio and communications – provided the entire communications solution for this outstanding project, integrating both wireless and wired digital intercom systems. Additionally, Riedel furnished the fiber-based video and signal distribution as well as the wireless video links from the capsule’s onboard cameras – enabling the stunning pictures delivered from the Red Bull Stratos capsule.

Felix Baumgartner, renowned extreme base jumper and sky diver, ascended to 24 miles (39 km) in a stratospheric balloon and made a freefall jump rushing toward earth at supersonic speeds before parachuting to the ground, breaking three world records with one jump: the highest skydive, the longest free fall, the first to reach supersonic speeds in free fall and the highest manned balloon ride.
For enabling reliable communication between Felix Baumgartner, all the team members at the launch site and mission control, Red Bull used a comprehensive communications solution from Riedel Communications.

For the capsule that transported Felix Baumgartner into the stratosphere, Riedel Communications provided the on-board video control system for nine HD video cameras with especially developed telemetry control. This system was responsible for the control of the video recording and also works as a comprehensive digital video router – not unlike a mini OB truck inside the capsule. It offered complete remote control of the whole video system and featured three HD video downlinks that were dynamically assigned to the selected cameras.
For providing a reliable communication between Felix and Mission Control a specially developed communications solution from Riedel Communication is used.